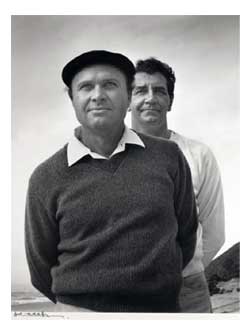 Emile Norman was born on April 22, 1918, in San Gabriel, California. His father was a walnut grower, and Emile grew up in a natural setting, surrounded by mountains, rivers, and agriculture. Hollywood westerns were often filmed on the family property. Emile often remarked, "During the Depression we didn't starve, there was plenty to eat on the farm." There were fruit trees (including many flavorful varieties that are no longer commercially grown, which Emile remembered with great nostalgia), vegetables, chickens and pigs. Also horses - Emile loved to ride his favorite horse, Dixie.

Already as a young boy he was focused on making art, inspired by the nature around him and using whatever materials he could put his hands on. Emile was always an innovator. At age 16 he created a remarkable sculpture illustrating the myth of Prometheus, using concrete and the broken pieces of his father's beer bottles. He lasted in art school one day, when his teacher told him he was doing the assignment "the wrong way." He was very much self-motivated and self-directed. 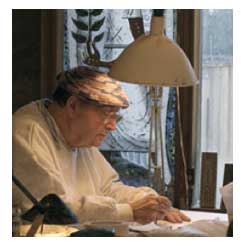 As a young man he was a commercial artist, producing window displays for Bullocks Wilshire in Los Angeles and working on the sets of Hollywood films. At the age of 25 he made his first trip to New York, where he displayed his innovative creations made of plastics, such as window shades, jewelry, dishes (decorative bowls and cups) and screens. His jewelry was photographed in Vogue magazine, and he also produced window displays for Bergdof Goodman, Bonwit Teller, and other department stores.

His first major show as a non-commercial artist was in 1951 at the Feingarten Gallery in New York, where his marble sculptures of animals and abstract organic shapes displayed his signature blend of meticulous detail and a generous, sweeping lyricism.